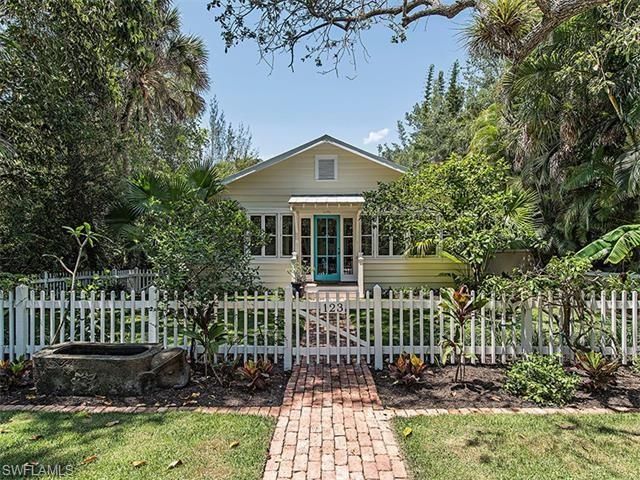 (ABOVE) This cottage is just one block to the beach in Naples’ charming Historic District.

This 1935 four-bedroom, three-bath property is on the same street where I lived when I first moved to Southwest Florida back in 1984. It’s so adorable inside and out that I fell in love with it as soon as I spotted it on Zillow. When I realized it also happens to be listed by Bill Van Arsdale–who was my neighbor back then, and later my employer for 10 years–I knew it was synchronicity, and I had to feature it on my blog.

As a side note, Bill and his brother John founded a successful Southwest Florida television channel, called Visitors Television, for which I was the on-air shopping and arts host from the late ’80s to late ’90s. Both brothers were so much fun to work for!

But I’m off topic. Let’s get back to the property! It’s called “Periwinkle Cottage,” and is located in Old Naples, only one block to the beach and three blocks to Third Street South (known for its popular shops and restaurants). According to the Zillow listing, the original two-bedroom, two-bath main house was updated in 2001, at which time a guest suite was added with one bedroom and a kitchen-family room with fireplace and wainscoting. There also is a fourth bedroom over the garage, and a brick-paver pool courtyard.

I love the bright paint colors, the wainscot paneling, and the rich color of the wood floors. And, of course, the white picket fence. It all feels so friendly and inviting.

The property is on the market for $3.695 million. To see more photographs and details, visit the site of listing agent Bill Van Arsdale of Gulf Coast International Properties. ~Janis Lyn Johnson 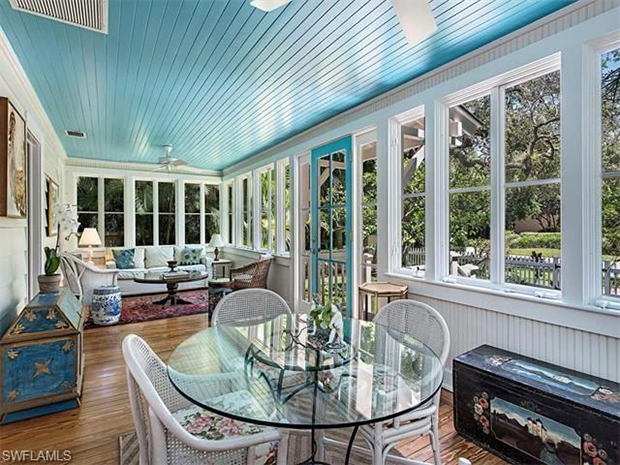 (ABOVE) The front porch, which leads to a charming living room (BELOW) with high, beamed ceiling and fireplace. 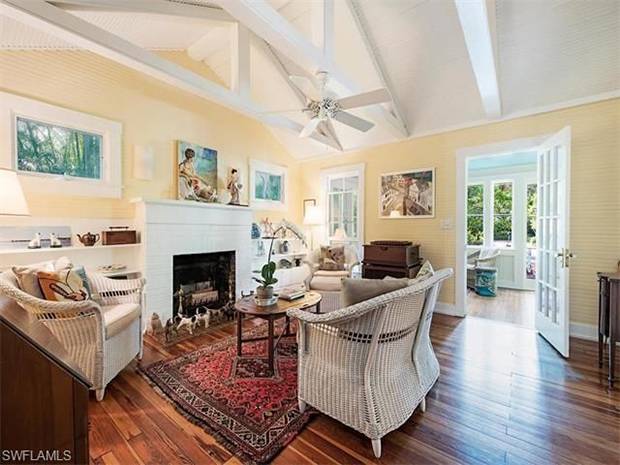 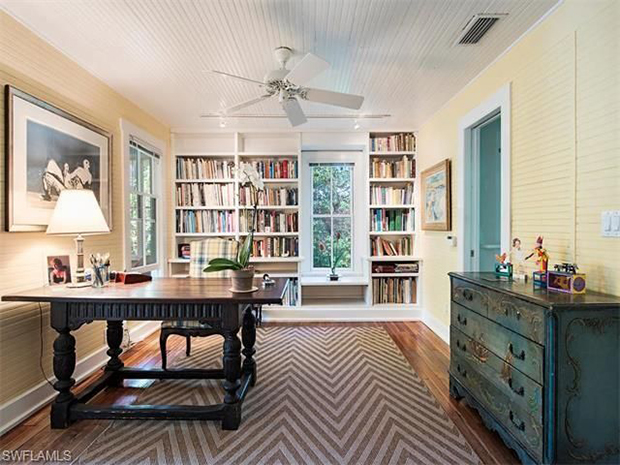 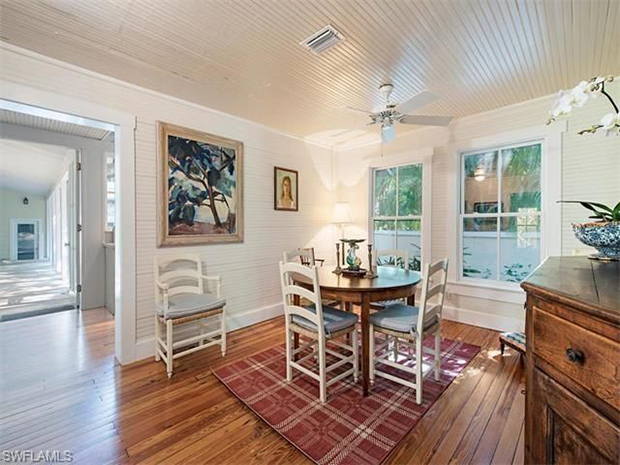 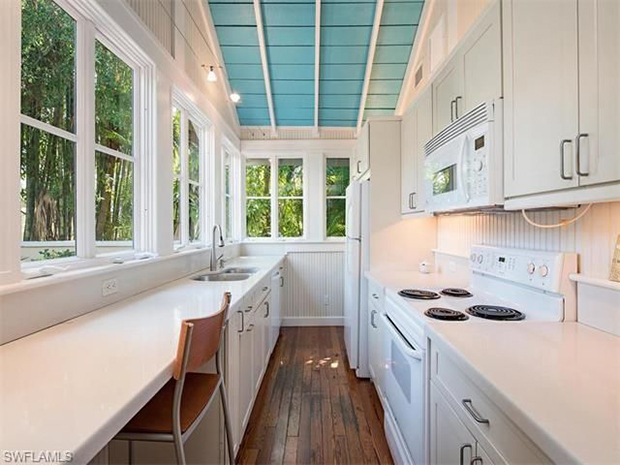 (ABOVE AND BELOW)) The kitchen in the main house, which looks out to the pool. 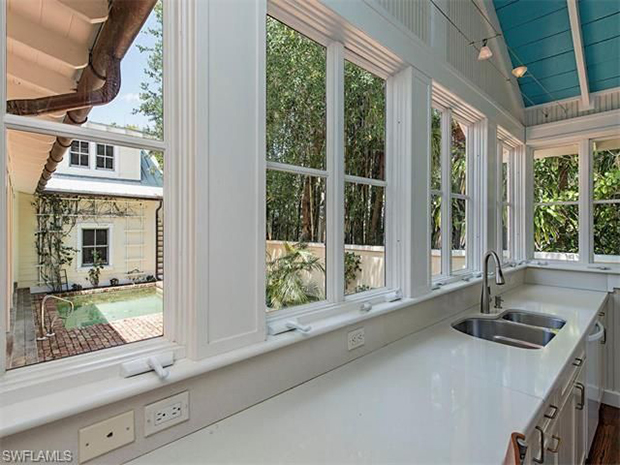 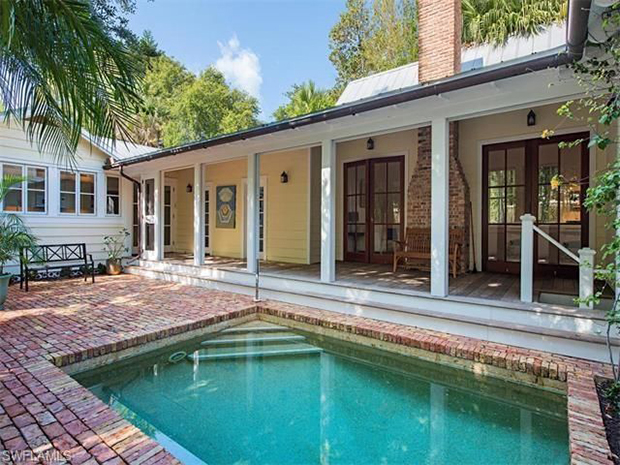 (ABOVE AND BELOW) Added in 2001, the attached guest suite includes a covered porch, bedroom, and a kitchen-family room with high, beamed ceiling and fireplace. 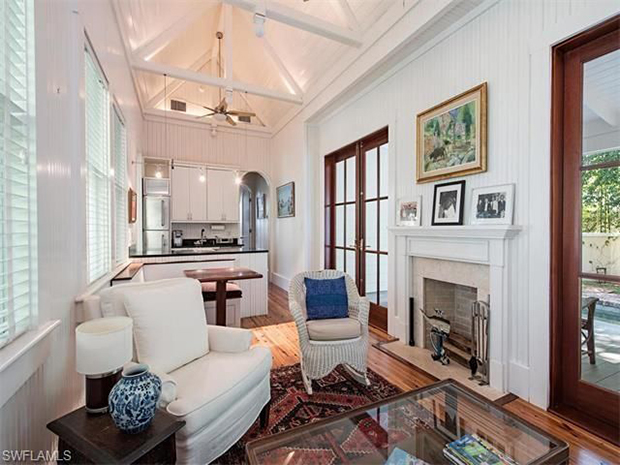 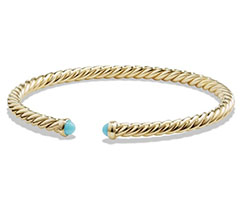 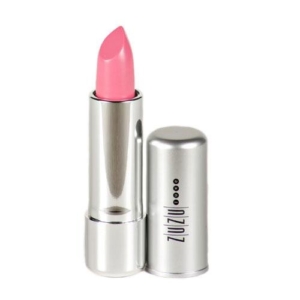